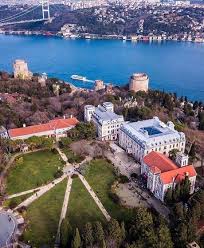 Two students currently completing their second-year Turkish Language sequence with Professor Oya Topcuoglu were each awarded an Undergraduate Language Grant (ULG) in the amount of $5,000 to attend the intensive Turkish Language and Culture Program at Boğaziçi University in Istanbul for eight weeks this summer. As a result of the ULG award, Abigail Everding and Georgia Schafer will have an incredible opportunity to improve their Turkish proficiency, explore Istanbul, and attend lectures on various aspects of Turkish culture, history, and politics.

Everding (WCAS '22), who is majoring in Linguistics and minoring in Advanced Asian Languages and Cultures, became interested in studying the Turkish language when, while living in Incheon, Korea, she encountered the large Turkish minority population living there. That experience drove her interest in conducting comparative linguistics research between Korean and Turkish, as well as research on bilingualism in minority communities.

Schafer (WCAS '22) studies policical science and anthropology with a concentration in Archaeology, so the opportunity to study in Istanbul is incredibly rewarding. Schafer is considering a career as an immigration lawyer, where her proficiency in Turkish would be put to great use.

The competition for a ULG is always rigorous, and it is a great accomplishment that two students from a small program like Turkish received it. The MENA Languages Program, and particularly Professor Topcuoglu, are very proud of Everding and Schafer.