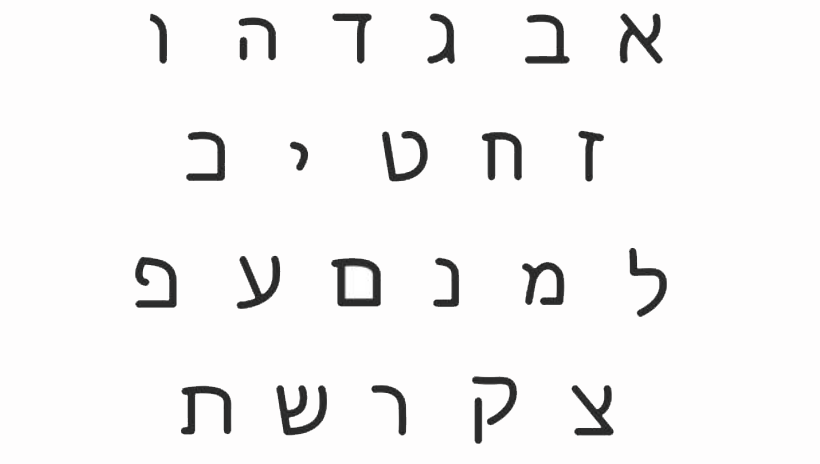 The alef-bet has no vowels. People who are fluent in the language do not need vowels to read Hebrew, and most things written in Hebrew in Israel are written without vowels. For learners of Hebrew however, pronunciation aids are often added, a system of dots and dashes known as nikkud (from the word nekuda in Hebrew, which means “dot” or “period”).

The style of writing most commonly seen in Hebrew books is referred to as Dfoos in Hebrew, which is block print or square script. There is, however, another style used when writing Hebrew by hand, which is called Ktav in Hebrew, Hebrew cursive.   Hebrew cursive is easy to write and its letters are not attached to each other as in English.

LEARNING THE ALPHABET FROM THESE VIDEOS

There are plenty of videos and apps to help you learn the Hebrew alphabet. They are good options since they frequently combine both audio and written learning for a well-rounded approach giving you a more practical experience using the new letters.  Checking out these resources during the summer before you start your class can really accelerate your learning.

Hebrewpod101.com is a free website with several videos that teach you the Hebrew alphabet. You can register for free. Once you are logged in, select “Lesson Library” (pull-down menu on the top), and then go to “Hebrew alphabet made easy” (30 brief lessons with letters, pronunciations and writing practice). This website teaches you everything you need to know to enhance and accelerate your learning of Hebrew. Here is the first video lesson as a sample:

PRACTICING THE ALPHABET ON YOUR SMART PHONE

Another good way of practicing the letters over and over again and quiz yourself  is on your smartphone using your index finger as a writing tool.  Write It! Hebrew is the first writing recognition app (as opposed to a tracing App) for the Hebrew alphabet! Try it out and realize how much fun it is and how much you learn.