We would like to welcome you to our Hebrew Program. We are excited that you are contemplating beginning or continuing with Hebrew and we hope the information on this website will be useful for you in making a decision.

Reasons to learn Hebrew
Modern Hebrew is the primary official language of the State of Israel and learning Hebrew will connect students to the life and culture of modern-day Israel. While Israel has become a popular tourist destination with its beaches, modern cuisine, history, archaeology, and religious sites, learning Hebrew will allow our students to go beyond the tourist attractions and immerse themselves more fully in the language, culture, and history. For those interested in research on the Middle East or in working there, a knowledge of Hebrew is invaluable.

But that is not all. Hebrew is becoming increasingly relevant in the world of international business as Israel's influence in world markets continues to expand. Israel has the third-largest number of companies listed on the NASDAQ exchange and is recognized worldwide at the cutting-edge of industry developing the technology of the future.  Hebrew is also a desirable language to know for those pursuing a career in government and in areas such as diplomacy, intelligence, and the military. The United States government considers Hebrew an important language and therefore offers scho 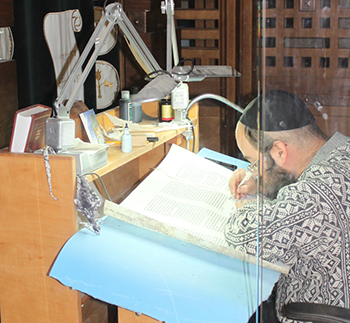 larships and grants to students pursuing studies in Hebrew and other non-Western languages considered critical to U.S. security.

The Hebrew Language
Hebrew as a language is both, ancient and modern. It was originally a biblical language used for prayer or religious study and as such served as a connector of Jewish communities around the world.  More than 150 years ago, Hebrew was revived as a modern language and today is spoken in Israel and beyond: there are about 5 Million speakers of Hebrew in Israel itself and close to 2 Million speakers in countries such as Argentina, Australia, Brazil, Canada, France, Germany, Palestinian West Bank and Gaza, Panama, and the UK. The United States has the second largest Hebrew speaking population of about 220,000 fluent speakers.  However, as the language of the Bible, Hebrew continues to fascinate and interest people around the world.

Hebrew is a Semitic language. It is written right to left except for numbers which are used exactly as in English, from left to right.  Hebrew uses a different script. It is known by scholars as the Jewish script or square script. It has a fairly simple alphabet consisting of only 22 consonants.

Because modern Israel was built on teaching Hebrew to waves of immigrants, the grammar is fairly systematic and not very complicated, built around three-letter roots. In addition, modern Hebrew uses a lot of words from common European languages and current influences of English and Arabic make it even easier to understand.

Our program
There are many reasons why learning Hebrew may be important for you and we have designed a program that takes many of the different motivations into account.  In an attempt to mimic the native speaker environment and to encourage students to continue studying Hebrew possibly in one of our study abroad programs, students in the first two years of our program will learn basic speaking, listening, reading, and writing skills in modern Hebrew. Courses on the third-year level offer continued practice in speaking, listening, reading, and writing through various cultural topics exposing students to more advanced literary and cultural texts. Our Hebrew courses are and carefully sequenced (Please review the Proficiency Goals here.) However, we offer a myriad of opportunities for you to engage and practice the language outside of class, from the regular language tables held throughout the quarter, to movie nights, to practicing with native speakers.